Belize, previously known as British Honduras, is located on the East Coast of Central America, bordering the Caribbean Sea between Guatemala and Mexico with a total area of 22,966 sq km. Belmopan is the capital of the country.

The northern half of mainland Belize is a plain which supports sugar cane farming along with the native scrub vegetation and tropical forests whereas Central Belize consists of large savannas that rise to the Mountain Pine Ridge and Maya Mountains.

Belize has many jungles, wildlife reserves, a large variety of different species of flora and fauna and the largest cave system in Central America. Symbols of this country are black orchid, the mahogany tree, the toucan and tapirs.

The climate of Belize is subtropical with an annual temperature of 79 degrees Fahrenheit (approximately 26 degrees Celsius) and average humidity of 85 percent. It has a rainy season which lasts from May to November and a dry season lasting from February to May.

With a population of just over 300,000 (as of 2012, the total population of Belize is 327,719), Belize is the second smallest country in Central America. Belizean society is truly multicultural with a mixture of Creole, Garifuna, Mestizo, Spanish, Maya, English, Mennonite, Lebanese, Chinese and Eastern Indian.

English is the official language of Belize, the primary language of public education. Spanish is spoken as a native tongue by 50% of the population and is taught in school. Most Belizeans speak Spanish, but almost all speak Belizean Creole and English. Bilingualism is very common and encouraged. Belize is also home to the endangered indigenous languages Mayan Mopan Maya language, the ArawakanGarifuna language and Plautdietsch or Mennonite Low German.

Belizean cuisine is inspired by British, Mexican and Western Caribbean cooking. The basic ingredients are rice and beans, which are often eaten with chicken, pork, veal, fish or vegetables. Coconut milk and fried plantains are added to the dishes to create a truly tropical taste. Exotic ingredients include armadillo meat, venison, iguana, iguana egg, and fried paca (called Gibnut in Creole). Conch soup is a traditional dish which has a characteristic taste and thick consistency from added okra, potatoes, yams, cassava flour and a touch of toasted habanero. 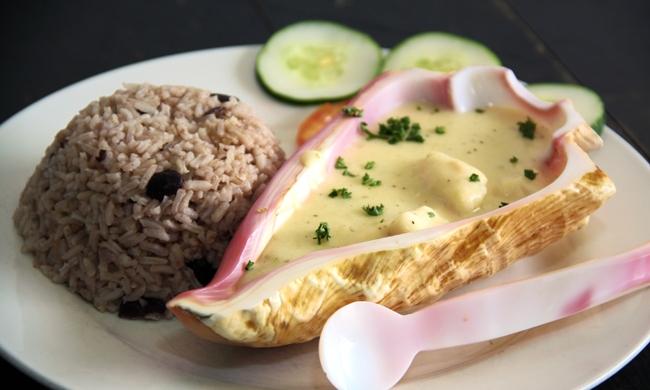 Immigration has brought Garifuna dishes based on fish and plantains, and among the best known are Hudut, Darasa, Ereba, and Bundiga. Belizean food is almost always accompanied by white rice in coconut milk.

You can still see British influence in many social situations. Flowers or confectionary are acceptable gifts to give to hosts if invited to their home for a meal. Dress is casual, although beachwear should not be worn in towns. It may be inadvisable to discuss politics, particularly if of a partisan nature. Time is much more flexible here and any impatience towards the lack of punctuality will not be well received. You'll be asked to get onto Belizean Time.

Belize is a predominantly Christian society. Roman Catholicism is accepted by about half of the population, and Protestantism by about a quarter. Much of the remaining population is comprised of Taoists, Buddhists and more recently introduced religions like Jainists, Islam.

Islam is also common among the Middle-eastern immigrants and has also gained a following among Creoles and Garifuna. Religious freedom is guaranteed and churches dot the streets of Belize almost as frequently as places of business; Catholics frequently visit the country for special gospel revivals. Jehovah's Witnesses have also enjoyed significant increase in recent years and now make up around 2% of the population.